Finding the best tickets and hotels

China is still on my list of places I want to visit. Especially the Great Wall, one of our world wonders, is something I would love to see. But preparing for such a trip can take time, especially if you are traveling with friends and all have busy schedules! I wanted to try different applications for comparing tickets and hotels to see which one would help me the best… and then improve it!

In this project I will compare three apps and see which one scores best on Nielsen’s Principles. I will then conduct user tests on this app and use the insights to create a redesign.

Who are we designing for?

I am designing for a ‘young group’ between the ages of 20 to 30 years old. These friends have decided to invest and spend some quality time together. They are planning a trip a year in advance to really make it happen and accommodate for everyone’s schedules. The destination; Peking. Mixing culture and leisure they want to share as much time together as possible. The highlight of their trip will be visiting the Great Wall. They have all saved for the last year so, while they are still price-conscious, this is the opportunity to spoil themselves.

Based on this persona, and Nielsen’s Principles, I conducted usability heuristic evaluations on Hopper, Skyscanner and Kayak.

→ Hopper: Something Hopper does really well is giving the user the ‘flexibility and efficiency’ of creating accelerators. It does this by enabling the user to set a ‘hotel- or flight watch’. Without any effort the user is notified, so there is no need to manually check for price changes. Where I feel Hopper could improve is parts of its design. In some screens nothing really stands out, forcing the user to spend more time scanning the page and looking for important information. Also, while some loading screens indicate what is happening, others do not.

→ Skyscanner: This app ended at the bottom of my list. The onboarding felt strange, because of the order they chose to structure it in. The system status is also poorly displayed, which may cause users to chose what they think is the best deal while the app is still loading alternatives. Finally, it seems like they tried to put everything in the same page which makes it full and reduces the visibility of some elements.

→ Kayak: Overall Kayak scored best on all of Nielson’s Principles. Additionally, the design was modern and minimalist, matching with the persona’s preferences (as did Hopper’s). This made it my target for more extensive testing and redesigning. The better the app, the bigger the challenge!

After having tried Kayak myself I already had some ideas on where I wanted to improve, but to get a better understanding of my users and see where they were struggling I conducted user tests. I recruited five participants between the ages of 20 to 30, that matched the persona, and asked them to conduct three tasks.

→ Task 1: First I showed them the landing screen off Kayak for five seconds. Then I asked them what the application was about, what they thought they could do with it, and any other things they might have noticed.

→ Task 2: Next they had to use the app to book a flight. I asked them to find the best deal for four people. They would want a direct flight and take hold luggage. Also, one person in the group could not make any flights before 14:00pm.

→ Task 3: In the final task I asked the users to choose a hotel. Specifically, they were looking for something with at least three stars, below €100,- a night a person, and including breakfast. Since they travelled with four people, they would want two rooms.

The users were asked to look for a flight and hotel between the 4th and 25th of September 2020. Their destination was Peking’s PEK airport, which is closest to China’s Great Wall.

*As an interesting note: Not a single user touched the bottom menu once!

My goal was to find out whether the app helped the participants find a flight and hotel. User testing proved that in the most part Kayak succeeded in this. But after being provided with a list of options the app did not help users make the best choice. There was too little information.

Users had a hard time comparing and, finally, choosing an option. Missing the right information users took longer to choose and were less sure of their decision. This means that the app, aimed at helping people choose, completely misses the point! 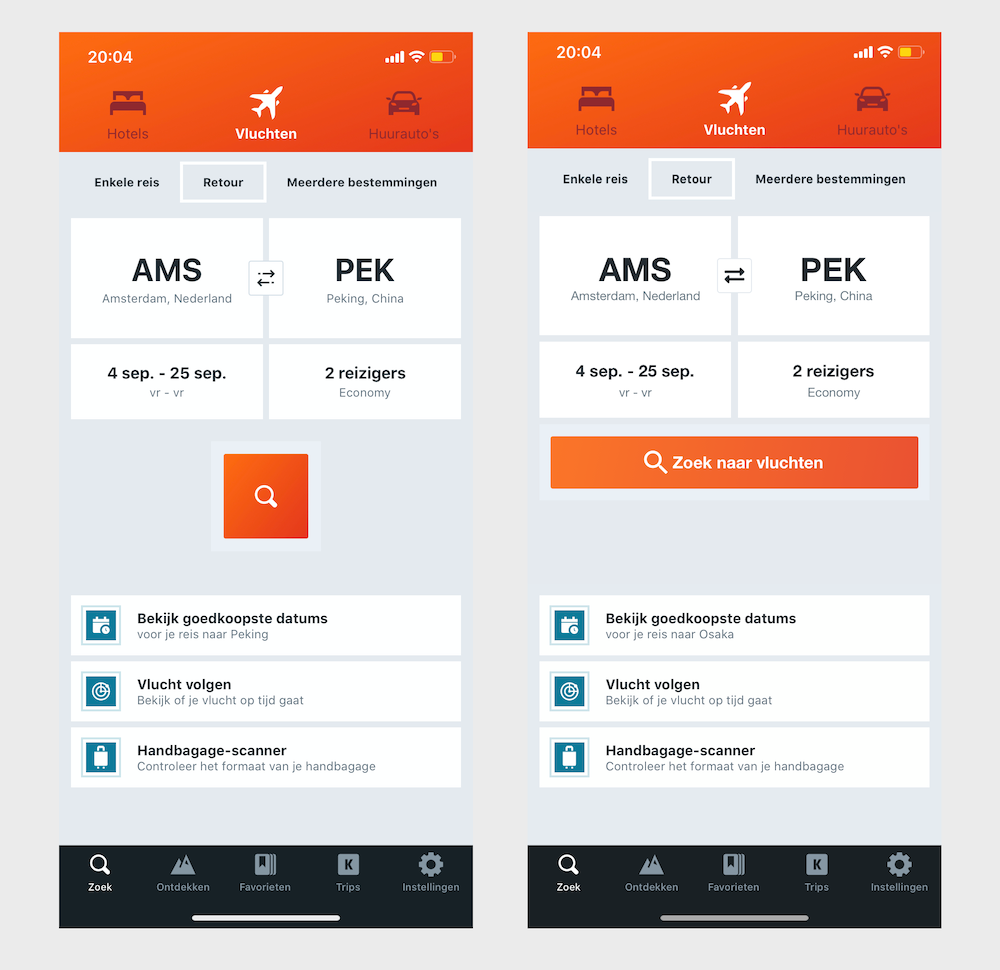 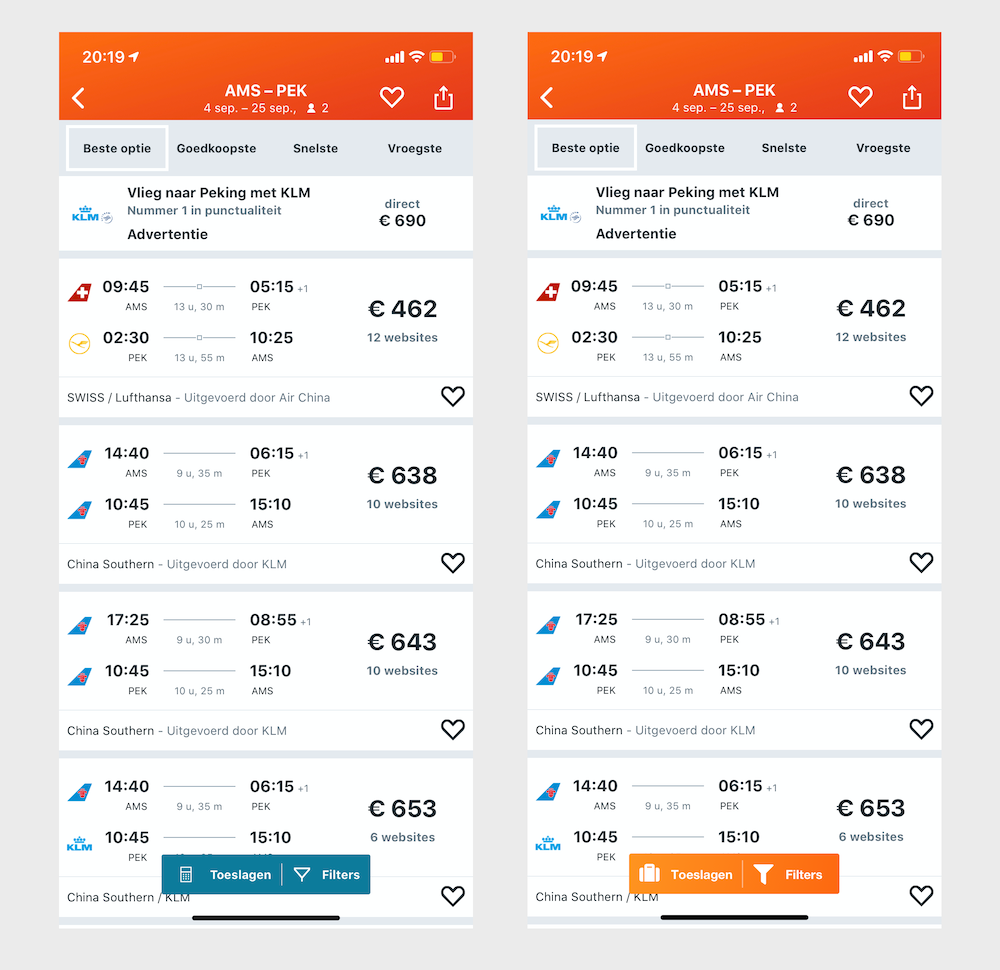 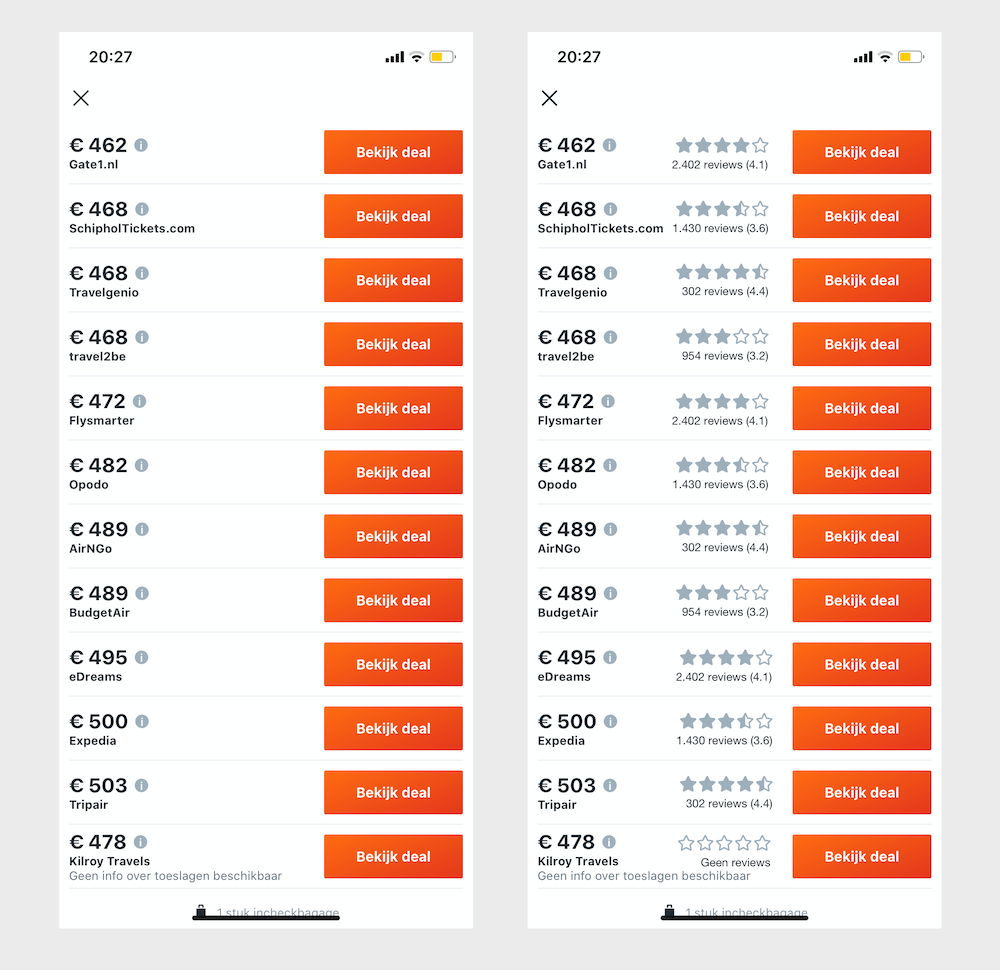 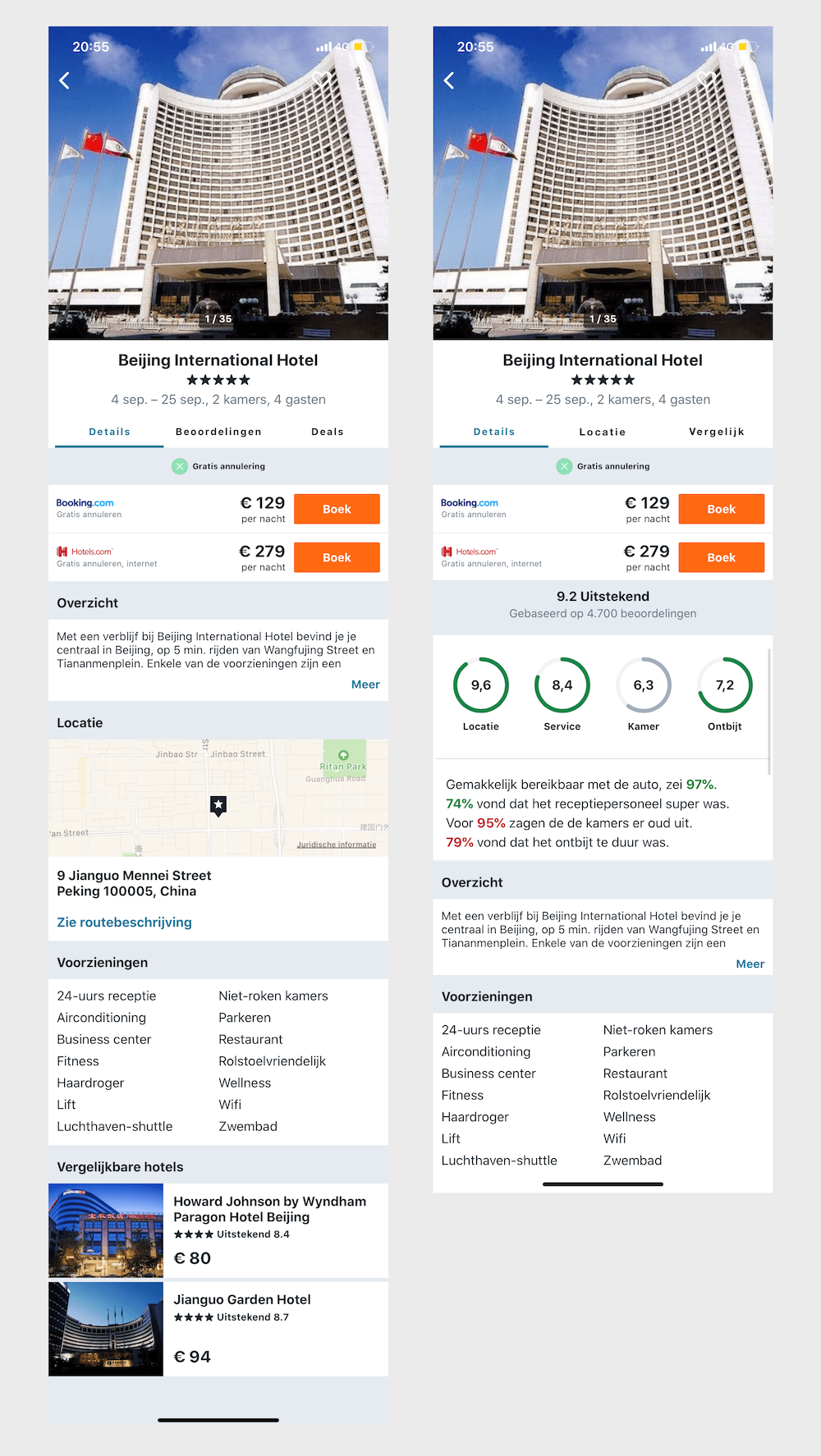 I enjoyed comparing apps using a usability evaluation based on Nielson’s Principles. While there are many usability heuristics I could have used, I believe Nielson’s are still a good place to start. And even though Kayak came out as ‘the best’ between the three, my participants still helped me find flaws in the design. This goes to show nothing is ever done or perfect.

Kayak revealed a few pain points of which I addressed the two most important ones. The bigger problem, however, was that the app did not help users make a choice once they had found a number of flights or hotels. Using the feedback i was able to add a piece of social validation, and reorganize existing content, to give users a clearer picture. These improvements could help Kayak become the go-to app for comparing and booking flights and hotels!

I am always down for a good conversation and new chances, so don’t hesitate to send me a message! A cup of tea (or coffee) never hurt anyone.